Earlier this year, the inimitable Jon Quail of (the equally inimitable) Marsden Jazz Festival, commissioned me to create something special for this year’s New Stream strand. We discussed various ideas and settled on the idea of a solo show of some kind. Being far from a stranger to solo piano performance, it was made very clear that this concert had to be something a little different…  Without too much forethought, I suggested a programme of solo synthesiser music. Now, I’m a huge fan of anything old and analogue, much to the detriment of my bank account over the years, and have always used any such instrument when a piano isn’t available. Although, one would have thought that a relatively recent transgression towards using an iPad/MIDI keyboard combination would have caused me to ditch the characteristically awkward proportions and often cumbersome weight of the former, but instead it just lead me on to rejecting the chair in favour of the bare stage floor and simply arranging said synthesisers within easy reach of each other without the need for keyboard stands. So much for embracing the digital age.

The decision to entitle this project the ‘Bourne Synthesiser Show’ is a direct homage to the pioneering work of Annette Peacock and Paul Bley (with albums such as ‘The Bley/Peacock Synthesizer Show, Improvise, Revenge (The Bigger the Love the Greater the Hate) and I’m the One, deserving particular mention). 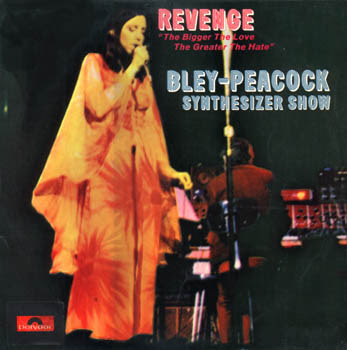 It was Peacock’s enthusiasm for new musical technology (and some not inconsiderable persuasion by both Peacock and Bley) that convinced synthesiser pioneer, Bob Moog, to let them leave his factory with one of the earliest modular units – gratis!! Unfortunately, I’m neither fortunate or knowledgable enough to own or even know how to turn on a similar modular system(!), but I have collected a few choice instruments along the way. It was Graham Hearn’s electro-acoustic music class at Leeds College of Music that first introduced me to basic synthesis and tape techniques via an EMS SYNTHI A and a Revox tape machine. I’ve been hooked on analogue technology ever since. A few years later I bought Graham’s boxed Korg MS10  and, over ten years on, is still a reliable and trusted old-faithful in my setup today. Marrying this with a Korg 700s, a LAMM Memorymoog and a Roland Space Echo RE-201, the setup is unapologetically analogue…

The challenge of this particular commission is actually two-fold: firstly, limiting myself to using only synthesisers (for projects such as Bilbao Syndrome, COLLIDER, and World Sanguine Report, et al., their function has largely ancillary to that of the Fender Rhodes electric piano). Of course, there is nothing strikingly new or original about doing this at all (especially for someone like Jean Michel-Jarre, Tomita or Franck Vigroux) but, personally speaking, it’s taking a little getting used to – especially as the understanding of the instruments I have at my disposal is largely intuitive and much of the music I create is improvised.

And therein lies the second part of the challenge: what is the most effective methodology by which to ‘compose’ a programme of solo synthesiser music, given the comparative ease and comfort that improvisation has afforded over the years? Strangely, the process of working on this particular commission is almost identical to that of approaching other work, be it improvised or otherwise. For instance, shortly after discussing all this with Jon, I was asked to support Melt Yourself Down at the Brudenell Social Club in Leeds – I apprehensively took only three synthesisers and a space echo and hoped for the best. I came away with a recording of the set from Pete Wareham’s laptop, which seemed to capture one or two ideas that had some potential…

In a similar vain, the recent living room concerts with acoustic bass guitarist Howie Reeve has allowed for the consolidation of these ideas and also for others to emerge – all the while gaining a deeper (although still intuitive) fluidity with the control of the instruments. So, in many ways, becoming more familiar with a particular combination of synthesisers through refining a few existing ideas whilst still courting the unpredictable, seems the most appropriate way to proceed. I’m not so much concerned with writing individual tunes or compositions but rather trying to become at one with a process of composing that is of my own devising rather than one that is only evidenced by notated music. Besides, it’s more fun and uses less paper – which is good for the environment.

SO, the best way to find out what all this is about is to come along to the gig at the Marsden Royal British Legion Club on Saturday October 12 at 12:00.

This concert was made possible with support from the PRS Foundation